You are an apprentice to the wizard, living in a grand tower, assisting the wizard's magic and learning the craft yourself.

From the inside, the tower seems vast to the point of infinite, emphasized all the more by how much of it is forbidden.

So many rooms are sealed by locks, sigils, and warnings. The wizard has always provided what you need, except for answers.

Even so, the wizard is not your keeper. The wizard is your master and mentor, and perhaps even your friend.

The wizard is gone.

You can find no trace of the wizard's whereabouts, no sense of where the wizard may have gone.

Almost overnight, it's become as though you never had a master at all.

There are these last places you haven't looked, though; the forbidden ends and edges of the tower finally open to you in the wizard's absence.

But why were these secrets kept from you all this time?

And will you be ready to see the wizard again?

The Wizard's Tower is a Descended From the Queen game about the apprentices of a mysterious wizard uncovering the secrets of the tower they've lived in following the wizard's sudden disappearance. It's about mysteries, relationships, and magic.  You'll need at least one player (ideally up to 6, or you can play solo), a standard deck of 52 cards (jokers removed), and these instructions to play. Players will take turns answering prompts to uncover the secrets of the tower and to learn about and develop their relationships with each other as well as the wizard, so that when the wizard returns, you know if you want to stay.

This work is based on For the Queen, product of Alex Roberts and Evil Hat Productions, and licensed for our use under the Creative Commons Attribution 3.0 Unported license.

For the Queen™ is a trademark of Alex Roberts. The Descended From the Queen Logo is © Alex Roberts, and is used with permission.

Just had a lot of fun playing this with my friends! The cards quickly told us who was the wizard's favorite (and least favorite) and helped us craft an intrigue rich story with a satisfying ending. I already look forward to playing again!

Had an excellent time with this as a solo journaling experience. A tweak for solo I used is to insert the Ace of Spades 1/4 of the way from the top of the deck. This still developed the story well, especially since I was the only player, and probably increases replayability even more.

Some notes on my session: the story developed wonderfully with a full-fledged arc and a sense of growing unease as the secrets of the wizard and the tower are uncovered. Your character's backstory develops on the fly, leading to a final catharsis.

This is an extremely satisfying storytelling game I'll keep returning to. An absolute gem.

thank you so much for leaving such a kind comment!!!! i'm so happy to hear that you enjoyed the game!! the ace of spades placement tweak is an excellent idea, too, so thank you for sharing it!! 💖💖

This lools delightful! Can't wait to get it to the table!

I had so much fun playtesting this and can't wait to play again!! 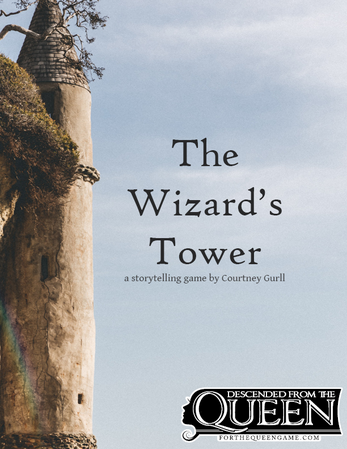 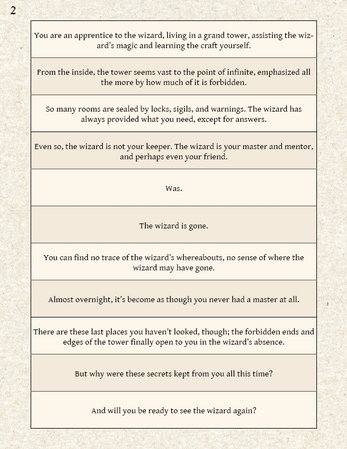 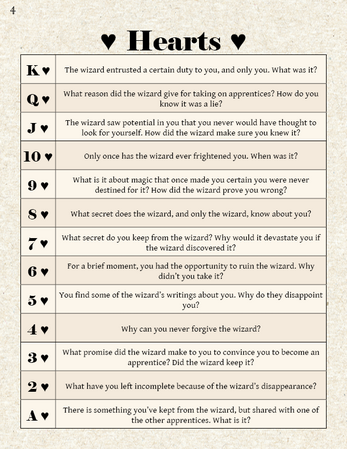